Sharks are quite a common purchase to freshwater tanks, for many reasons; they can make a striking addition to a community or species-only tank and offer a little variety. There a few different varieties of shark to choose from and you should always consider the fish that they’ll be placed with before deciding which to go for.

Some grow far larger than others, this may also limit your choice of a shark to add to your existing tank. Do not make the mistake of buying a juvenile shark (that looks so small and cute right now) that fits in your current aquarium if you do not have the room, or inclination, to upgrade your tank when the shark outgrows the original one.

Most are suited to freshwater but there are also some who prefer brackish water, which should always be kept in mind when choosing which to get. Here are six of the most common and popular sharks available for freshwater aquariums. 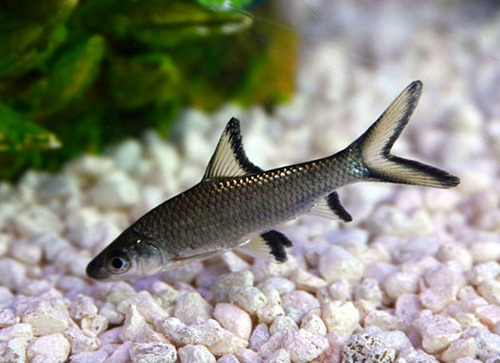 The Bala shark, also known as a silver shark, is quite striking. It features shiny silver scales, large black eyes, a yellow-tinged forked tail and has black outlines on their dorsal, caudal, and pelvic fins.

They’re a beautiful example of a freshwater shark but you should give some consideration before adding this species to your freshwater tank. These sharks may look small and sparkly in your aquarium store but they can grow to quite the size!

A Bala shark can grow to more than 12 inches long and they do best in groups, of at least four, so they can take up a lot of space in your aquarium. If a Bala shark is the fish you’d really like to add then a minimum tank size of 125 gallons (473 liters) with a lot of length for them to swim around in is needed. 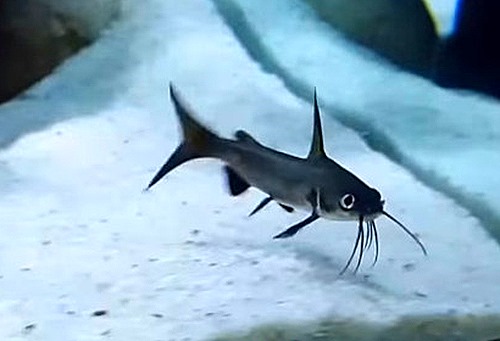 The Colombian shark, also known as a Tete shark catfish, is classed as a catfish and not a shark in the classic sense. It bears the name shark due to its appearance and swimming pattern.

Colombian sharks have a classic shark shape, featuring a tall dorsal fin, their body is silver-grey with a white belly. Younger Colombian sharks tend to be more vibrant, in terms of color, the adults tend to be a little duller and usually have a white stripe on the tip of their fins.

These fish feature a dorsal spine, which is more than capable of stinging their owner so care is advised when catching them (ideally do not use a net they can get tangled in, a jug or bucket is advised).

Columbian sharks prefer brackish water, freshwater that’s lightly salted, so ensure any tankmates are also suitable for brackish water when deciding what to add with them. 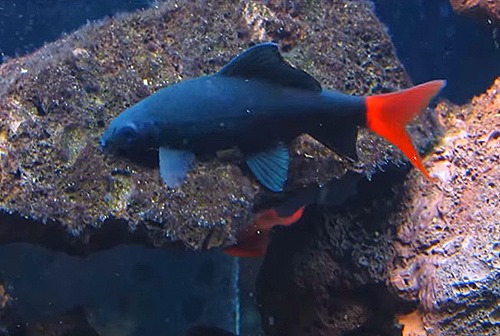 The Red Tail Shark, often known as a Red Tail Black shark, is a stunning fish that is jet black with a vivid red tail (when cared for correctly) These are one of the most common freshwater community sharks you can purchase.

As long as your water parameters are perfect, and feeding them well, then you’ll see the brightest red tail from your shark.

They can sometimes be territorial of the bottom of the tank so take care when selecting other bottom dwellers, like Corydoras, loaches, or other catfish. Red Tail sharks can also be aggressive towards other fish that are similar in shape to them or anything that also has a red tail.

They’re one of the smaller freshwater sharks you can get, growing on average to six inches in length. If adding a Red Tail shark to your aquarium it is generally advised to add it last, to help prevent territory issues. 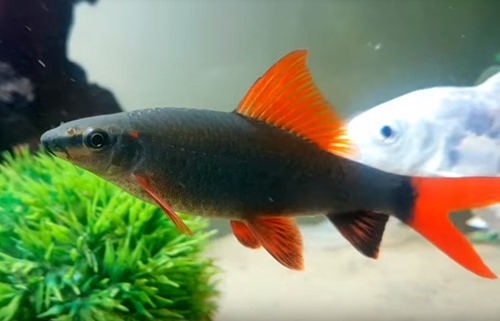 The Rainbow shark, also known as a Ruby shark, is perfect if you are looking for a shark with some color to brighten your tank up. They feature jet black bodies with bright red dorsal, caudal and pelvic fins and can look quite striking in an aquarium.

These sharks grow up to around six inches and can be territorial with other bottom-dwelling fish. They’re much more tolerant of fish that stick to the mid and upper levels of the water.

Rainbow sharks also love to clean your tank for you, they enjoy eating algae on the bottom of the tank and may even take it off the glass.

They’re far happier when they have a variety of hiding spaces made available to them, you can provide wood, rocks or even plants for them to tuck themselves away into when needed. 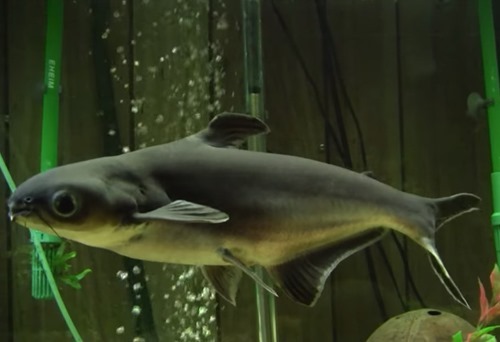 The Iridescent shark is definitely the fish for you if you want one that looks exactly like a shark while still being able to fit it in your home aquarium. These sharks are a beautiful gunmetal grey and can grow up to four feet long!

Due to the size these sharks can grow to, they should be kept in large tanks only, ideally 300 gallons (1135 liters) for an adult-sized shark. You should only mix these sharks with other fish that are larger than their mouth, if it fits in there then they’ll likely eat it.

They prefer to swim in the middle water of the tank, with a moderate flow, to best recreate their natural habitat. Iridescent sharks are quite hardy fish, as long as the tank is monitored and cared for closely.

The Silver Apollo shark is one of the more peaceful sharks available for freshwater aquariums. That being said, you should still avoid pairing with tankmates that could fit in their mouth, as that could be a tempting snack!

These sharks prefer a fast flow of water, similar to the lively rivers they come from, and can grow to 10 inches so a tank size of at least 6 foot long is advised. This allows them room to swim around freely, as they would in the wild.

Silver Apollo sharks are known for being skittish and will jump given the chance, so always ensure you house them in a tank that has a tight-fitting lid and be wary of making sudden loud noises near the aquarium.