The colors of the clown killi may be what initially attracts you, but in no time at all, you’ll be won over by their charming personalities! If you can meet their needs, they’re just a great all-around fish! Absolutely adore them! 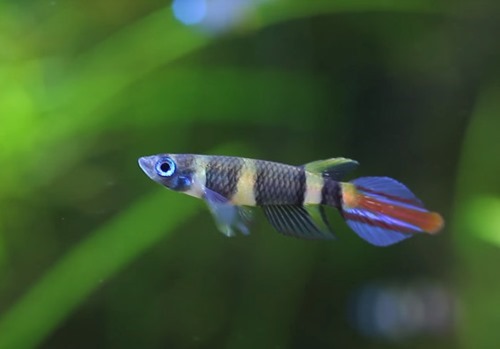 Clown killies are one of the smallest killifish. Color patterns can vary widely on different fish, especially the fins.

The social nature of this fish has really surprised us. Many species that school together, don’t care what goes on in and around the tank, but clown killies seem to be the exception to the rule.

They are one of the most curious fish we have ever come across. Anything that’s put into the tank, be it your hand, a net, a plant, whatever, has to be thoroughly investigated. Walk past their tank, and they immediately swim up to the glass to see what you’re up to.

Your killies may be shy at first, but don’t get discouraged! Once they feel comfortable and at home in their surroundings, they’ll come out of their shells and you’ll be able to enjoy their wonderful personalities.

A lot of the clown killie’s time is spent, hovering near the surface of the water, they just sort of hang there. You won’t see a lot of active swimming on their part, although they do have bursts of energy, where they zoom all over the tank. This habit (hovering) can lead to a very bare looking aquarium because they can be hard to see up near the surface of the water. If this bothers you, you can lower the water level in their tank.

In our school of 10 killies, there is a definite hierarchy. The alpha male is quite a bit larger than the other males, and he has no problem asserting his authority. To date, we have not seen any nipping or biting, but at times, there is a lot of chasing. Our females will also chase each other, but this is a fairly rare occurrence. 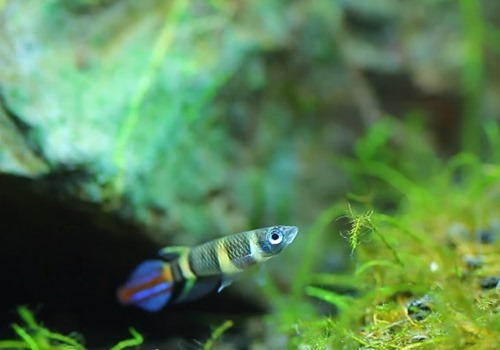 A mature, fully-cycled tank with a lid, low lighting, and floating plants. The tank should have a top because they are excellent jumpers. Clown killies really seem to enjoy subdued lighting, probably because they hover so near the surface.

They enjoy slow-moving water, keep this in mind when choosing the filter. A small box filter or power filter with an adjustable flow is recommended.

They will often spawn in the roots of floating plants, so you may want to consider this when setting up your tank and include some duckweed, azolla, water lettuce, riccia, etc. You can also try moss as a spawning material or just use spawning mops.

Something else you might wish to add is catappa leaves and/or alder cones; both help lower the pH naturally. Dried oak leaves may be used in lieu of catappa (Indian almond leaves). 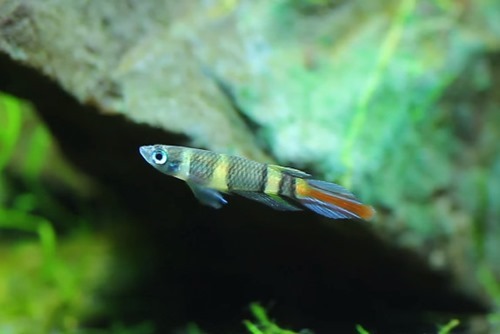 Clown killies are social fish and should be kept in groups of at least 8-10. Keeping them in larger numbers, as opposed to a single fish or pair, will allow you to see more of their natural behavior.

If the plan is to breed them, then they should be kept in a species only tank. The males will spar and chase one another, this is a natural behavior and is for the most part, harmless.

If breeding your killies is not part of the plan, then small tetras, micro rasboras, pygmy cories, otos, and shrimp, are good choices.

We have our clowns in with some pygmy cories and it was love at first sight! They get along exceedingly well and frequently school together. There are also ghost shrimp in the tank, and the killies have never once made an aggressive move towards them. We have not tried housing them with any of the more brightly colored shrimp, but from what we’ve observed with the ghost shrimp (who are right up in the killies’ face), we think they’d be okay.

As with all things animal, use caution and common sense when introducing new tankmates.

They are omnivores and should also be fed live and frozen foods as often as possible. Flakes and micro pellets are generally ignored.

Some foods they especially enjoy are rotifers, baby brine shrimp, small, live, blackworms, daphnia, and mosquito larva. Feeding your killies a well-balanced, varied diet will give you a healthier, more colorful, fish.

Be careful not to overfeed them though. From what we’ve observed, they have a betta-like tendency to overindulge.