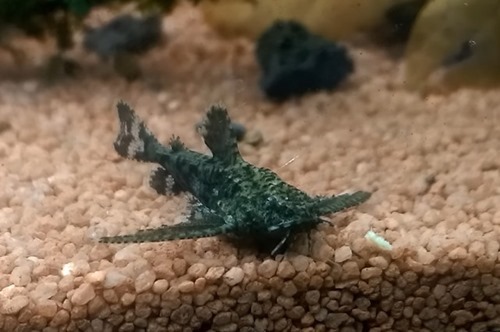 If you’re looking for something a bit different for the nano tank, then you may want to consider the Asian stone catfish. These bottom-dwelling peaceniks are a truly unique addition to the aquarium!

They are also called anchor catfish. As seen from above, it’s understandable why Hara jerdoni is also called an anchor cat. They look like miniature anchors, don’t they?

The color of a stone catfish depends on several factors; time of year, the environment, even its diet. Colors include red-brown, light brown, dark brown, and gray.

Stone catfish are considered shy and retiring, but I wonder if it’s more a matter of being nocturnal, rather than shy? While not a boisterous fish, by any means, ours are out and about during tank maintenance and we often have to shoo them away from where we want to vacuum.

That being said, since they are nocturnal, if you want to see them, you sort of have to make it a point to look for them. We’ve noticed that having several of them together in a school gives them added courage.

Because of their needs (both dietary and environmental), we would classify the Asian Stone Cat as an intermediate to advanced fish. They’re definitely not the first fish for the beginner. 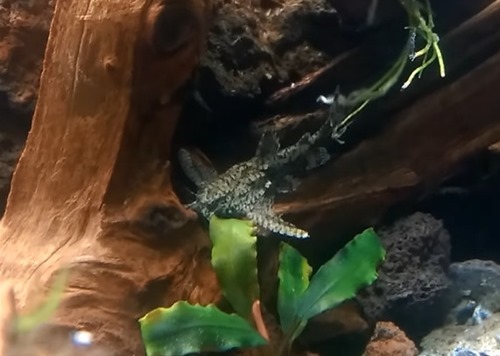 You’ll want to provide lots of plants, dim lighting, and numerous hiding places for your cat; and while not necessary, a sand bottom is appreciated. If using sand or very fine substrates. Be careful when vacuuming – these guys like to bury themselves.

Unlike most catfish, they don’t seem to particularly care for driftwood, but they do like plants and can often be found hiding amongst the leaves. Ours have a special fondness for the Bolbitis and Vallisneria nana.

Stone catfish, are not active swimmers, so they don’t need much room; a 10-gallon tank will house several comfortably.

Stone catfish need clean, cool, and well-oxygenated water. They do not belong in an uncycled tank!

It is important that they have a high level of dissolved oxygen in the water; this becomes especially critical if/when they are kept at the higher end of their temperature range. Air stones, powerheads, and/or strong filters, can all be used to help achieve this.

Like many other bottom dwellers, stone catfish can be susceptible to bacterial and fungal infections. Maintaining a clean aquarium, that includes a weekly vacuuming of the substrate, goes a long way towards alleviating any potential for disease. 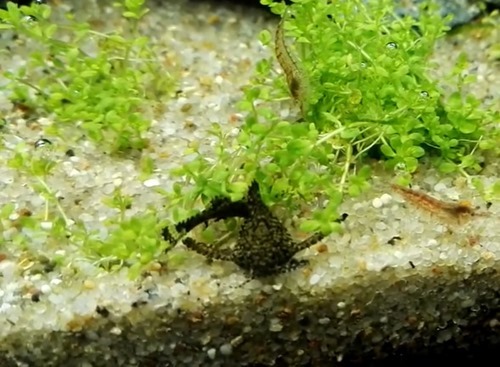 Stone catfish make an excellent addition to the peaceful, cool water, community tank and should be kept in groups of at least 3-5. Ours are housed with white cloud minnows and red rili shrimp, which has worked out really well.

Some other suggestions are celestial pearl danios, loaches, gold barbs, espei rasboras, and scarlet badis. In larger tanks, they would work well with farlowellas.

Stone catfish are nocturnal feeders, and although we’ve looked, we’ve never actually seen them eat anything. The good news is they’re still among the living, so they must be getting what they need.

We feed ours a combination of live and frozen foods as well as catfish pellets, algae wafers, and fresh veggies. There have been reports that some of these fish will not accept any sort of dry food, so when first introducing them to your tank, keep an eye on things.

If they start to look emaciated, you may want to lay off the pellets for a bit and stick to a diet of live and frozen foods. To ensure that your catfish is getting enough to eat, feed them after lights out.

Be careful if housing them with other bottom dwellers – you don’t want anything overly rambunctious sharing the tank with them as they are easily outcompeted for food.