About Angelfish and varieties 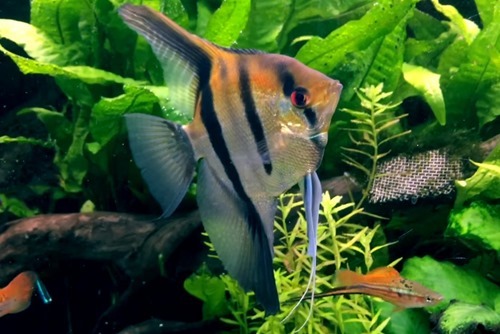 Angelfish are one of the most beautiful kinds of tropical freshwater aquarium fish. In the wild, they live in swamps or flooded grounds among roots and plants of the Amazone river basin in tropical South America as well as the rivers of Amapá in Brazil, the Oyapock River in French Guiana, and the Essequibo River in Guyana.

Angelfish have a highly compressed lateral body with long fins coming out of the top and bottom. The tail is vertically oriented and may vary in shape depending on the variety. The Angelfish’s true color is white with four vertical bars but there are now a few more varieties available on the market: 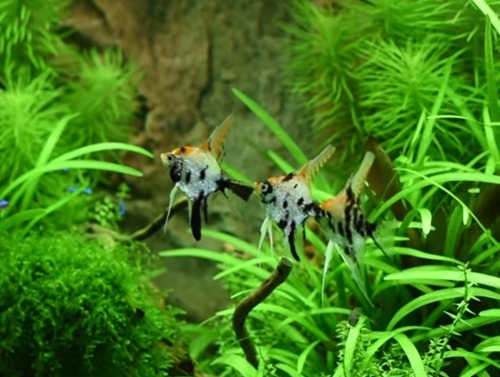 Angelfish need large tanks due to their sizes and fin spans but the tank should also be tall. Angelfish like to swim up and down but they can reach as much as ten inches in height with their long fins.

They love well-planted aquariums and lots of plants will also help in keeping the water clean, adding oxygen, and preventing the growth of algae.

Broadleaf plants such as Sword plants should be used to give them lots of choices for laying their eggs. Plants will help keep the aquarium stress-free and will help remove nitrates and phosphates. Rocks and driftwood can also be used, just make sure you allow plenty of swimming space.

Originating in South American river basins – particularly in the Amazon – Angelfish thrive in fish tanks that emulate their southern homes. The water should ideally be around 80 degrees Fahrenheit, the pH level should be kept at slightly acidic (between 6.5 and 6.9), and a GH of 0 to 12. Frequent water changes must be performed to ensure good water quality.

Angelfish usually get along well with most community fish. Avoid any smaller fish that the Angel can consider food and never add fin nipping fish to the tank. Angelfish have been kept with other Angelfish, tetras, algae eaters, sharks, and Gouramis.

Angelfish will get along better and be happier if there are groups of them in the same tank. They should be kept singly or in shoals of four or more. Smaller groups will result in dominance battles and bullying.

In a show of dominance, Angelfish will lock lips almost as if in an intimate kiss! Though if you watch them closely you’ll soon realize that it’s an act of aggression as they push each other as hard as they can. These displays are interrupted long enough to get some fresh air and rest and then are resumed! This behavior may continue over and over for a period of time.

They will also often peck at each other and swim in circles to show that they are the king of the tank. This normally doesn’t result in any injuries and is just their way of demonstrating power.

Another prominent characteristic of Angelfish is curiosity, although this curious nature is directed more towards food! If you touch the outside of the tank with your finger or another object, the Angel’s mouth will move along with it!

As far as feeding the Angelfish, they are carnivorous fish that in the wild feed on smaller fish and macroinvertebrates.

In domestic conditions, Angelfish will eat almost any commercial fish food and can survive on flakes alone. But, for optimized health, they should be given a variety of live, frozen, and flake foods.

Live food is a very good choice for an occasional treat! Brine shrimp, mosquito larvae, guppy feeder fish, and even earthworms that are finely chopped are favorites with Angelfish.

They will also eat frozen and dried foods such as blood worms, shrimp, and crabs. A variety in diet is especially beneficial during breeding.

How to Breed Angelfish? 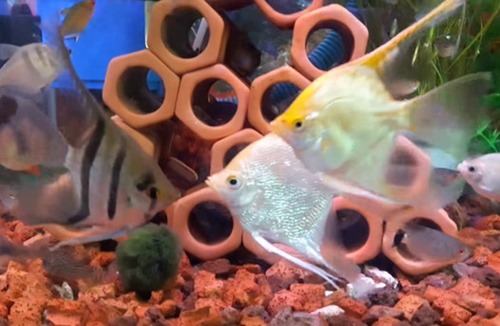 Breeders will be happy to know that Angelfish are relatively easy to breed – in fact, the fish are most content when they have the right conditions and the opportunity to breed. What follows below are tips and steps for breeding Angelfish.

Angelfish are monogamous and they mate for life. Once an Angelfish has chosen his or her partner, separating the pair for any reason, including death, will lead to a refusal of the remaining fish to breed. They are also loyal partners, protecting their mates from any perceived threats or other suitors.

The fish reach sexual maturity between six and twelve months of age. At three years of age, the spawning of the Angelfish begins to decrease, and eventually ceases altogether.

Unfortunately for the Angelfish, years of inbreeding has not had beneficial results for their parenting skills. Sometimes, the Angelfish parents are diligent moms and dads, mouthing and fanning the eggs, as well as removing any dead eggs from the bunch. But other Angelfish have different ideas about their own eggs, viewing the eggs as a great mid-afternoon snack. Most professional breeders remove the eggs from the tank and hatch them away from the parents in a gallon jar of water.

For an Angelfish pair to spawn, feed the Angelfish a varied diet, clean the water in the tank, and warm the tank up a few degrees. This helps stimulate their instincts to spawn. Another trick to help get the fish going is to add a quart of water from another tank in which Angelfish are currently breeding. As for size, try to use a 20-gallon (75-liter) tank.

Depending upon the health and the size of the female, she will lay between one hundred and twelve hundred eggs, and the male will follow behind her and fertilize the new eggs. Healthy fish in good spawning conditions will breed every two weeks, or even more frequently.

In the wild, Angelfish lay their eggs on sword plant leaves. In artificial conditions, most professional breeders insert a piece of slate into the tank, leaning it at a thirty-degree angle against the tank wall. Once the female has laid the eggs and the male has fertilized them, the majority of breeders remove the slate and place it into a jar of water, as aforementioned. To the jar of water, the breeders add methylene blue to keep fungus away from the baby fish.

4. A Nursery Full of Baby Fish

A few days after the eggs have been fertilized, the slate takes on the appearance of movement as the tadpole-like baby Angelfish begin to hatch, still remaining attached to the slate. If the slate has not been relocated into a separate jar, take care to remove any snails or algae eaters (plecostomus fish), because the baby fish make very tasty meals for these creatures.

When it comes to feeding the new Angelfish, flake food is not enough. The main reason for this is evolution: baby fish are programmed to bite things that move and wiggle, and flake food does not move and does not wiggle. This is the stage when most breeders lose baby fish because they do not feed the babies live food. It is not unusual to lose as many as 90% of the baby at this stage if they are not properly fed.

Adding plants to the aquarium at this point will help the babies to snack between meals – microorganisms that grow on the aquarium plant leaves make good food for the baby Angelfish.

The best baby food for Angelfish is newly hatched brine shrimp. One-twentieth of a teaspoon of brine shrimp, several times per day (3 – 4 times), is the best way to feed the new Angelfish.

Microworms are another type of live food that the baby Angelfish will be happy to eat. These can be easier to create than the brine shrimp, and take up significantly less space than the former.

6. Angelfish Aren’t the Most Obedient Children

At three weeks, the Angelfish start to act like human teenagers: they start picking on their parents. Unlike humans, the Angelfish do this literally, sometimes aggressively nipping at their moms and dads. If the fry haven’t already been separated from their parents previously, now is the time to do it. At three weeks, it’s time for the young Angelfish to strike out on their own and find their own place, otherwise, their constant picking at mom and dad can cause wounds to open that could actually kill their parents.

What can be done with these adolescent Angelfish? For amateur breeders, young fish can often be traded at a local fish store for store credit or even cash. For professional breeders, a healthy Angelfish can fetch as much as $20.