Not discovered until 2006, there is still much to learn about the Celestial Pearl Danio. One thing we do know is that it’s gorgeous and lives up to its celestial name. When courting, their body color will intensify and the white “stars” on the danio will almost glow. It’s hard to describe in words, but beautiful to see!

A little about the history 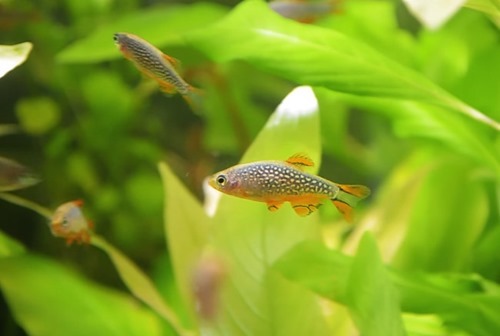 The Celestial Pearl Danio, or Danio margaritatus as it’s known scientifically, made its grand entrance into the hobby in 2006. Whilst a relatively recent discovery, this fish has been subject to a lot of attention, not only for its dazzling looks either.

First discovered and photographed by Kamphol Udomritthiruj, there was initially a lot of criticism regarding the images of this fish, many believing them to have been computer-generated. Such criticism provoked a firm response from Kamphol Udomritthiruj who published further photographs of his discovery, not only silencing his critics but sparking a huge interest in the fish.

It took very little time before what was known at the time as the Galaxy Rasbora to become available to buy in the aquarium trade. Its classification was later changed to Danio margaritatus as it was believed, upon further study, to be more closely related to danios.

Sales of this fish were obviously very popular, you don’t need to examine its unique and vibrant appearance for long to work out why. The fish was in good supply at the time and its price relatively low due to the large numbers collected… before its price shot up a firework.

Whilst demand for the Celestial Pearl Danio was still very high, supply fell drastically following an export ban in Myanmar in 2007, also known as Burma, the country where this fish was originally discovered. It was understood at the time that the species was being over-collected to the point of near-extinction.

At the time there had been no discovery of any other Danio margaritatus populations, making a decision to ban exports seem like a rational step to take. Naturally, the result of this was a huge increase in prices as a result of the extinction scare.

Even though initially it was thought to be under threat, it turns out after subsequent discoveries that the Celestial Pearl Danio is actually present in locations other than Hopong along the Salween River basin in Shan.

Introductions over, now here’s how to keep and breed the Celestial Pearl Danio. 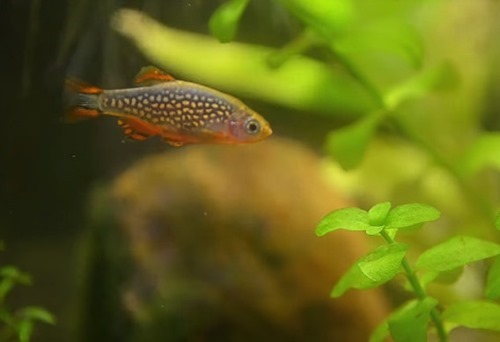 A very nice looking fish: the body has a blue background, similar to that on the Zebra Danio, with bright pearls along the side. The fins are adorned with intense orange stripes. The name margaritatus is Latin for “adorned with pearls”. Clearly a reference to the appearance of this stunning little fish.

This is one, extremely shy, fish, so don’t expect it to swim up to greet you every morning or for it to make googly eyes, begging for food. It’s probably not going to happen.

Our Danios are in an area of the house with constant activity (pets and people walking past their tank multiple times a day). Despite having them for months, they still run for cover if anyone approaches. If you sit still, they will come out and resume normal activity, but if you move, they get spooked.

We’ve tried putting them with other fish hoping to overcome their nervousness but to no avail. Other fish don’t seem to freak them out, just people. Basically, you just have to accept that they’re not going to be out and about like a guppy, and that shyness is an inherent part of their personality.

CPDs aren’t an especially active fish. They have bursts of energy where they’ll chase each other all over the tank, then they go back to “hovering.”

Male celestial pearl danios are the brighter of the two sexes. Their bodies are a deep, almost midnight blue, with white to off white spots. Their fins are an intense, red to orange color, with black stripes. When ready to breed, this coloration intensifies with the abdomen turning orange as well.

Female danios are more washed out the blue on their bodies, is a faded blue-green, and their fins, a pale orange. Females have fewer pearls than males along its side, too.

Neither males nor females of this species are very big. Females are slightly larger and have fatter abdomens than males, however, neither is likely to exceed 0.8 inches (2cm).

Despite their hefty price tag, it can be rewarding to keep this species at home. They are easy to breed and fairly tolerant when it comes to water parameters. They also look very attractive when kept in a well-planted aquarium and their fully developed coloration is a perfect contrast to vibrant green foliage. 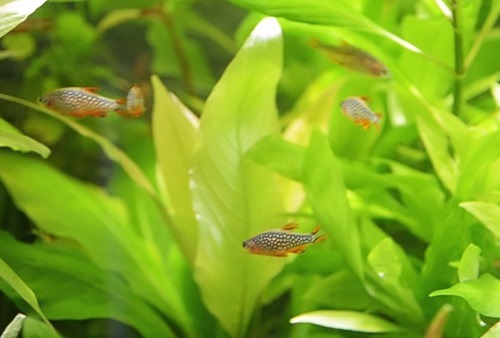 Whilst these fish do not generally exceed 0.8 inches in length, they can be aggressive towards each other (fin nipping and chasing). For this reason, you should keep them in a tank at least 10 gallons in volume, preferably larger. This will allow for a nice sized school of fish and cut down on the aforementioned aggression. Fortunately, this behavior does not extend to tank mates.

Celestial Pearl Danios are lower to bottom swimmers. Generally, they live in shallow waters not much deeper than 12 inches so a long yet shallow tank would be perfect.

Despite their flamboyant appearance, it is important to know that these fish are actually quite skittish. In order for this fish to be happy, it is best to try and recreate its natural habitat; lots of plants, driftwood, rocks, etc. They seem to enjoy swimming in, around, and under roots and caves.

They prefer heavily planted aquariums with natural décor that breaks up the lines of sight along the tank. Plants found in their natural habitat include Elodea, an easy-to-grow aquatic plant.

Lighting, fertilizer, and CO2 should be added in accordance with your plants’ needs. Filtration needn’t be too ferocious and an air-driven sponge filter should suffice in the majority of cases.

Whilst tolerant of a wide variety of water parameters, the Celestial Pearl Danio does best in slightly alkaline water, close to 7.3, yet fairly soft too. It can accept a large temperature range as well – anything from 68.0 to 79.0°F (20 – 26°C).

Overall, they are easy-to-care fish as long as their basic needs are met. 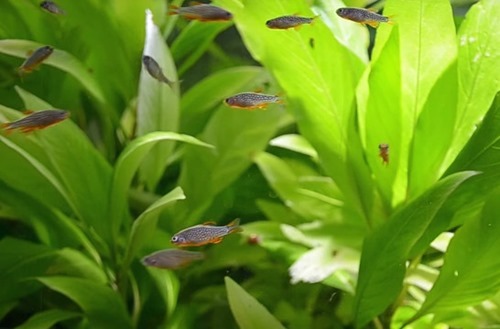 In the wild, this fish doesn’t coexist with a great number of species. It is a skittish fish that will remain hidden in the presence of larger tankmates. It will be less timid and you’ll see more of this fish if you include other similarly sized or smaller species.

The Celestial Pearl Danio should generally be kept in decent numbers in a tank. This divides aggression amongst the fish and assures it is harder for any single fish to be picked out as the weakest.

When kept in large groups, this fish is less timid and displays better colors. A shoal of Celestial Pearl danios looks exceptionally impressive. They shouldn’t pose a threat to shrimp.

As with most other micro fish, these will do better in a species tank or one with carefully chosen tank mates. They are not a good candidate for normal community tanks.

We house ours with red cherry shrimp and pygmy cories. Some other suggestions might be Sundadanio axelrodi, microdevario (kubotai, gatesi, nana), chili rasboras, Phoenix rasboras, etc.

Updated: Moved the school of CPDs to the tank with the Pseudomugil furcatus, Peacock gobies, and Daisy’s ricefish. Before the move, we observed the gobies to make sure they were not territorial over the bottom regions of the tank (since they would be sharing that area with the danios).

After several weeks of no aggression, we decided it would be okay to move the CPDs to their new home. There was also some concern that the overly rambunctious rainbowfish would freak them out, but since they couldn’t possibly hide any more than they already did, we decided to risk it. If worse came to worse, and they became too stressed, they could go back into their old tank.

Long story short, they have come out of their shells and can be seen swimming all over the place. In fact, we can now walk up to the tank without them skittering off into hiding. Who’d have guessed? We figured the pygmy cories would have made a much better dither fish for the CPDs than the furcatus or ricefish.

When it comes to its diet, this fish isn’t a fussy bunny. They are a micro predator in the wild, feeding on small invertebrates, algae, and zooplankton. In the aquarium, we have not found them to be picky, they will eat anything and everything as long as it reaches the bottom.

From what we’ve observed, they will not swim to the surface to feed. They will accept flakes and small pellets but should be given frozen and live foods as much as possible. This will help bring out their color and keep them in top condition.

Like many small aquarium fish, the Celestial Pearl Danio will find small invertebrates to snack on as well as algae, though don’t expect it to control an algae problem.

If wild-caught, your CPD may not accept anything but live food (at least initially). If this occurs, then blackworms, daphnia, baby brine shrimp, and mosquito larvae, are all acceptable choices.

Should you wish to breed this fish, I would highly recommend using live food such as Daphnia, white worms, micro worms, or good old Artemia.

This fish isn’t particularly difficult to breed in an aquarium. The Celestial Pearl Danio is an egg scatterer that deposits patches of 30 or so sticky eggs on the leaves of plants in its environment.

Prior to spawning, males can occasionally be seen attempting to guard a plant or area of dense vegetation. Sparring can also take place between males, though certainly not to the same extent as more aggressive fish like Bettas.

In order to increase the chances of spawning, dense planting or wool mops can be added to the aquarium. Fish should be conditioned with a varied diet that includes live food prior to breeding.

There doesn’t appear to be any seasonality to their breeding so no temperature changes are necessary. Eggs are, however, unlikely to hatch is the temperature if at the lower end of the scale.

It takes around 3 to 4 days for eggs to hatch into very small and dark-colored fry. You may not spot the fry at first glance as they tend to spend most of their time at the bottom of the tank. You can expect to wait a further 3 days before the fry become free-swimming although a small number of eggs and fry may be eaten by rival males. They won’t reach adult size until they are at least 3 months old.

As soon as you think about breeding your Celestial Pearl Danios, you need to make sure you have everything you need to feed the fry at each stage of their development. Infusoria and micro worm are both good for this. Algae and microscopic inverts are naturally present in the aquarium but worth supplementing with fry foods.

Should you wish to raise greater numbers of fry, it is highly recommended that you set up a separate tank for raising the fry. This needn’t be large but well filtered using a gentle air-driven sponge filter.

Whilst it’s a shame that the Celestial Pearl Danio endured such a price hike, we would like to end this article on the prediction that ease of reproduction and popularity of this species will sustain its inclusion in the aquarium hobby for years to come, be it by amateur or commercial breeding projects.