Dozens of different factors can cause problems for your fish tank, one of which is oil film. In this guide, we’ll discuss what aquarium oil film is and how to get rid of it. We’re also going to review some of the best surface skimmers in the market today.

What is the oil film on my aquarium surface? 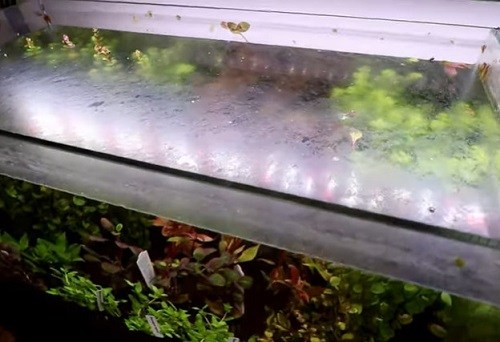 The oil film you can find on the surface of your aquarium is a common phenomenon that occurs in stagnant bodies of water. When oil film suddenly starts to form in your fish tank, it’s usually an indication of an imbalance in water conditions. There are several reasons that oil film forms on the aquarium water’s surface, but the two primary sources are fish waste and uneaten food.

Some types of fish food contain oils, which often cause the formation of fish oil inside the fish tank. This is especially true when you overfeed your fish, particularly with live foods. When left uneaten, fish food dissolves in the water and releases oils and proteins. These oils and proteins rise to the water’s surface, and if there isn’t enough water agitation, they will stay there, appearing to envelop the surface.

Fish poop contains some fat and is also a common source of aquarium oil film. When not adequately broken down, fish waste products release oil and proteins that can pollute the water. And in connection to the previous reason we covered, the type of fish food you feed your fish will also determine how much their waste will contribute to oil film in the aquarium.

You will notice that feeding live food like mosquito larvae and bloodworms will produce more oil film faster than any other food source. That’s because these types of food have more fat and protein content.

Oil from your hands can also cause oil film in your aquarium. When you stick your hands into the water, oil from your skin gets washed off and stays on the surface. This is why it’s important to wear aquarium-safe gloves when cleaning the aquarium, trimming plants, or catching fish.

How does oil film harm the aquarium? 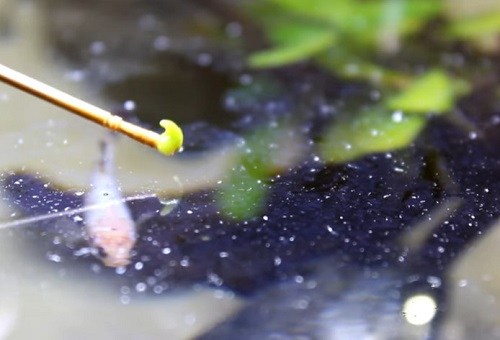 Even a tiny amount of oil film can act as a barrier against oxygen and light. The effects can intensify in an overstocked aquarium. Fish draws oxygen from the water and releases carbon dioxide that the plants use for photosynthesis with the help of light. Imagine if there’s a blanket of oil film keeping oxygen and light from entering the aquarium. The result will be devastating.

How do I remove the oil film? 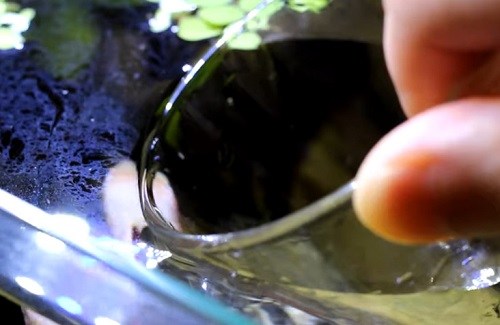 There are several ways you can eliminate oil film from your aquarium. The quickest way is to manually remove the film using a small container, preferably with a spout like a measuring cup. The water displacement caused by dipping the cup into the water will cause the oil film to flow into the cup. You can then just replace the water you’ve removed afterward. The downside of this method is that it’s time-consuming.

Another way is to increase water movement in the aquarium. This works when you have a dead spot in the aquarium where the oil slick usually forms. A slight adjustment to the position of the filter or the strength of the water flow will ensure that water circulates a lot better and reduce the chances of oil film forming in the water.

Moreover, since overfeeding is a common cause of oil film, it makes sense to watch how often you feed your fish and how much. Aside from not overfeeding, it’s also important to choose the right food quality to feed your fish.

High-quality fish food does not easily break down, leaving the water cloudy and producing oil film. They also don’t contain ingredients that are hard to digest and cause your fish to produce more waste. If space allows it, you can also add a female guppy or two. In my experience, female guppies sometimes eat oil film and help clear the water surface.

You also can’t overemphasize the importance of regular tank maintenance. Trim your plants regularly, as they can also contribute to poor aeration once they grow tall enough to reach the surface. Cleaning the tank wall with an algae magnet cleaner and removing uneaten food by siphoning the surface of the gravel can also help a lot. And don’t forget your water changes. You’ll be amazed at how a simple maintenance routine can do a lot for keeping the water surface free of oil film.

The AquaTop SSK 65 Surface Skimmer is an excellent choice for fish tanks up to 100 gallons in capacity. It has a flow rate of 65 GPH and can eliminate oil film on the water surface very efficiently. This model has a compact design and is easy to install. It comes with a suction cup mount, which means you can place it anywhere inside your tank.

Aside from being merely a surface skimmer, this model comes with a small sponge block for added mechanical filtration in your aquarium. Finally, this surface skimmer operates via a quiet and energy-efficient submersible pump. The pump has flow adjustment, so you can determine how strong you want the current to be.

An effective aquarium surface skimmer not only removes oil film on the water surface but also provides adequate water movement for gas exchange. That’s what the Sunsun Aquarium Surface Protein Skimmer offers. It comes with an adjustable air tube that injects bubbles into the water to increase oxygen content while at the same time preventing oil film from forming at the water surface. 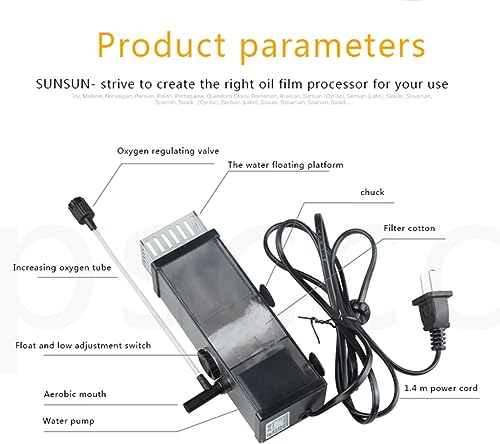 The air tube is adjustable via an oxygen regulating valve that sticks out of the water. Don’t let the various features of this skimmer intimidate you. With its straightforward design, this protein skimmer is easy to install and operate.

SeaChem Tidal 55 Hang On Back Filter

The SeaChem Tidal 55 HOB Filter is primarily a hang-on back filter that features a surface skimmer intake. Many aquarium keepers love this product as it provides several benefits in one. As a hang-on back filter, this unit is heavy duty and is designed for tanks up to 55 gallons in capacity. It has an adjustable flow rate, a great feature if you keep fish that don’t like a lot of flow.

The surface skimmer feature is located above the primary intake and beside the outlet waterfall. It pulls water from the surface, keeping oil film and protein film from forming. What makes this HOB filter-slash-surface skimmer is that it comes with a maintenance alert feature. A blue peg pops up at the top of the filter to let you know it’s time to clean the filter. A really neat feature you won’t always find in aquarium filters.

EHEIM is a leading name in the aquatics industry, so you can never go wrong with the EHEIM Skim 350 Aquarium Filter. One of the best features of this aquarium skimmer is that it’s ready to use straight out of the box. The unit doesn’t come with a lot of parts, so you can just attach it to your tank right away and get rid of all the waste on the water surface.

This model comes with three suction cups, so you don’t have to worry about it falling off. With a GPH rating of 80, this skimmer can effectively remove gunk from the water surface and aerate the tank simultaneously.

A HOB filter and skimmer in one, the CBG-800 UV Sterilizer Hang-On Back Filter by GRECH is a top choice for many aquarists. This is a heavy-duty filter, which, at 6 inches, is designed for fish tanks between 20 and 50 gallons. The additional skimmer feature is what will get rid of the oil film from your aquarium water.

At 211 GPH, this unit provides efficient filtration and cleaning capabilities. Also, both the filter and skimmer are adjustable, so you can choose how fast or slow you wish the flow to be. Finally, it features a UV sterilizer for preventing and eliminating algae growth inside the tank. It has a light indicator, which tells you whether or not the UV function is on.

This surface skimmer is for you if you’re using any Fluval 05-, 06-, or 07-series canister filters. It’s specifically designed as an accessory for the canister filters mentioned. It comes with a flexible hose that you attach to the input tube of your filter and two suction cups to hold it in place.

The flexible hose lets you place the skimmer a little bit further from the filter. You also have an option to attach the skimmer without the hose and directly into the filter’s input tube with the help of an elbow tube that comes with the unit. Overall, this is an efficient skimmer that can remove organic film from the water surface and help improve oxygen exchange in the tank.

This surface skimmer is specially designed for planted tanks. It comes as a feature of the JARDLI Glass Lily Pipe Inflow. This product is perfect if you’re looking for a surface skimmer that blends well with your aquarium. Since it’s made of glass, it appears to be a part of the aquarium and not a separate piece.

The skimmer comes with a 360-degree inflow design so that it takes in water from all directions, effectively removing gunk from the water surface. Easy to install, this unit is compatible with various brands of filters, including Tetra and Eheim.

Here’s another Lily pipe-slash-surface skimmer on our list, but this time, it’s from FZONE Studio. This set is designed using high-quality borosilicate glass, so you can expect it to last long. The skimmer automatically adjusts with the water level, so you don’t have to worry about adjusting the height of the entire piece.

The unit comes with a rotating knob at the bottom of the pipe, which is used to adjust how fast or slow you want the device to suck in water. Finally, the unit comes with a spring brush made of soft nylon bristles and stainless steel for easy cleaning and maintenance.

The Azoo AZ13123 Nano Surface Aquarium Skimmer is a good choice if you’re looking for something with a discreet design. It’s made of thick, transparent plastic that allows it to blend with the background and not disrupt the beauty of your aquarium. The clear design also allows for easy monitoring.

This unit is a space saver at only about 5 inches in length. It doesn’t come with a lot of frills and is easy to attach to the glass wall. This should be your go-to if you’re after something that’s simple yet very practical.

One of the cheaper options on our list, the Odyssea Clean 100 Surface Skimmer, is a small yet powerful piece of equipment for eliminating oil film from your aquarium. It has a flow rate of 10 GPH and is designed for both freshwater and marine water tanks.

Instead of suction cups, this unit comes with two brackets that allow you to hang and secure it on the edge of the glass. This surface skimmer has a clear design, as well, and with the output pipe positioned parallel to the water, it can effectively get rid of oil and protein film from the water in no time.

Is a surface skimmer necessary?

It is unnecessary, a well-balanced tank without surface oil films doesn’t need it. However, it is a beneficial addition to any freshwater aquarium. The number benefit of installing a skimmer is that it keeps your aquarium water clean and fresh at all times, reducing the frequency of having to remove oil film and gunk from the water surface manually.

Having a skimmer increases the efficiency of gas exchange taking place in your aquarium, so if you want your fish to live a long, happy life, do get a surface skimmer.

What’s the difference between a surface skimmer and a protein skimmer?

Can I use a protein skimmer for my freshwater aquarium?