Opinions are divided on snails of all types and their place in the aquarium. Some hobbyists believe snails to be a true menace, tearing away at plants and breeding like rabbits, spreading their ugly presence to all four corners of your patiently sculpted aquatic masterpiece. Others, on the other hand, find them interesting, useful additions to an aquarium that help eat unwanted fish food, plant waste, and algae. This article explains the different pest snails you may encounter in an aquarium, how they get into your tank, the risks they pose, and the various means of getting rid of them. 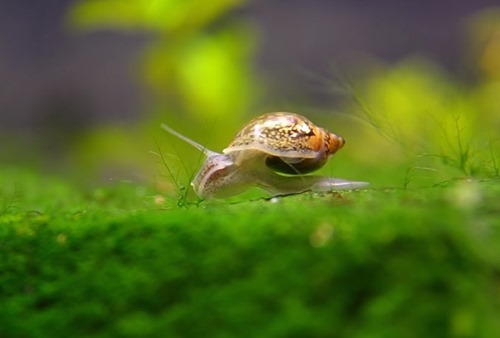 Perhaps one of the most disgusting, ugly, and uninteresting of pest aquarium snails. With a yellowish-brown pointed shell, this snail will happily eat anything it can find. In controlled numbers, this would be ideal as a few of these little beasts could eat up your unwanted fish food, algae, decaying plant matter, and even the dead fish you haven’t been able to notice.

Some people even believe these snails to be better algae eaters than many fish sold under this pretense. However, it isn’t possible to control the number of these snails – many of them hide under shelter during the day – nor is it possible to keep the mass of biological waste constant for them to eat.

Most pond snails get into your aquarium through the introduction of aquatic plants or even second-hand equipment and ornaments. In most cases, they arrive as eggs and once in your aquarium, they are exceptionally good at breeding.

If only your beautiful collection of rare fish was this good at breeding! Pond snails are hermaphroditic and require only themselves to breed; no partner is required, they simply fertilize their own eggs before releasing them in a clear gel onto plants or any other surface for that matter. One snail can become hundreds in a very short period of time.

One of the main threats posed by this snail to the balance of your aquarium is the increase in pollution when they die, which they regularly do. If you haven’t yet experienced the unquestionably vile odor of a rotting snail, you should be keen to keep it that way! There are many factors contributing to snail deaths such as the use of certain fish medications. 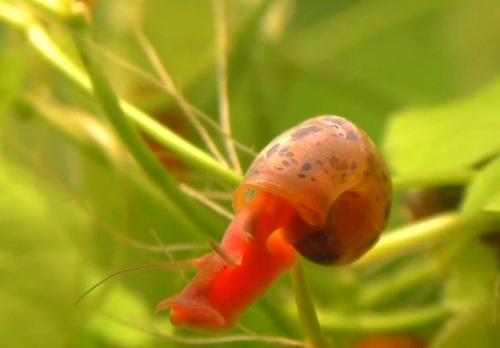 Ramshorn snails differ in appearance to pond snails by their coil-like shell. The majority of ramshorn snails are a brown to black color with some slightly lighter and others red. There is even a more attractive blue variety. They rarely exceed one inch in size and are more active than pond snails, often seen eating algae on aquarium glass.

Ramshorn snails generally eat the same things as pond snails: leftover food, algae, dead fish, etc. but they also have a penchant for fine-leaved plants making them a nuisance in planted aquariums.

Reproduction is just as easy for ramshorn snails as it is for pond snails. They reproduce in the same manner and are also hermaphroditic meaning one snail can rapidly become many. They are prone to dying in small aquariums and pollute the water in no time at all. They also increase the biological load on your filter by turning plants such as cabomba into feces. 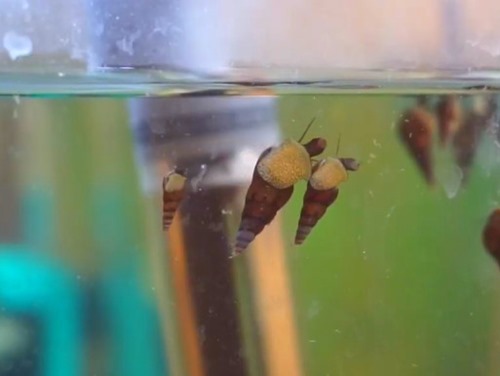 Melanoides tuberculata from the family Thiaridae also called the Malaysian trumpet snails is one of the most common snails that exist in aquariums around the world. It can be found from Egypt to India and needs a temperature above 20°C to survive. It can not live without minerals, as it needs salt to build its shell. It feeds on algae and leftovers, which makes it an excellent cleaner in the aquarium.

Melanoides tuberculata is a nocturnal snail, will hide in the substrate during day time. You can never know the true number of the population that exists in your aquariums unless you turn off the light for a couple of hours and wait for them to come out.

Soon the population will increase so significantly that it will give you the impression the substrate is moving because of their movements. This consists of an advantage for the aquarium plants because it aerates their roots. Their only disadvantage is their numbers; they will get into anything, even the filter and sometimes dozens of snails will go to the surface which is a sign of poor water quality.

How to prevent snails from entering the aquarium?

When one snail can rapidly become many, it is vitally important to prevent even one snail from making itself feel at home in your aquarium. Unfortunately, it is remarkably difficult to spot baby snails or snails’ eggs and even the most vigilant efforts can be undone by a failure to spot just one baby snail hiding in a plant. It is also very difficult to stop them from breeding out of control but not impossible if you are wise to the causes of snail infestations. 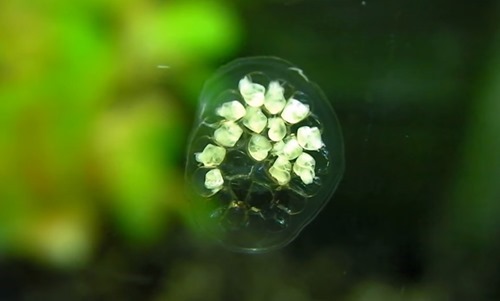 Some people choose to soak their plants before adding them to their aquariums. Whilst not entirely foolproof, this does work to a certain extent. Plants can be soaked in alum, bleach, or potassium permanganate although please, for the sake of your other, more welcome, aquarium inhabitants, rinse thoroughly in water and dechlorinator. Your fish will not thank you for adding bleach to their environment. Some snails are very resilient and will actually survive a soaking in mild solutions of these substances.

Despite our best efforts, these little creatures manage to find a way into our aquariums and you can bet your bottom dollar their next move is breeding. Before you know it, you’ll soon have more snails than you can count, a seemingly impossible to conquer snail armageddon. Many people don’t even notice how many snails they have in their aquarium as many like to remain hidden from view during the day. So how can they be removed after they’ve had time to establish themselves?

How to remove snails once they are in your tank?

As explained in the first part of this article, snails like to eat leftover fish food and decaying plant matter. An abundance of these foods is also a breeding trigger in some snail species, especially the Malaysian Trumpet Snail. Basic cleaning measures such as gravel vacuuming and not overfeeding your fish or shrimp – snails love shrimp pellets – will greatly reduce the amount of food available to these unwanted diners

This cannot be advised for every type of aquarium and can have very adverse side effects if used in inappropriate situations. Copper, present in most of these treatments, is harmful to other invertebrates including snails and shrimp: using this treatment will rid your tank of snails, but will also kill off any shrimp or snail species you wish to keep all in one go. Some aquarists also advise dropping a few pennies into the water to release copper, although this may be less effective than the treatments.

Another problem with waging indiscriminating chemical warfare in your aquarium is that it kills all of the snails in a short space of time, resulting in potentially thousands of rotting snails in your tank, something that will be sure to overload your filter, smell worse than awful and cause dangerous spikes in ammonia levels. In a planted aquarium, the type of setup most susceptible to snail outbreaks, you are unlikely to be able to find all of the dead snails to remove them, so this is almost certainly not an option.

Chemical treatments work best in tanks where there are few places for snail corpses to be hidden from view, no other invertebrates, and a substrate you can easily sift through to find all burrowed snails. Chemical snail treatments aren’t really the purist’s solution, nor do they tick many boxed on the long-term practicality chart either.

A manual yet effective means for removing not all but many of your pest snails is to leave a piece of lettuce or cucumber in your aquarium overnight. Snails love eating these foods and will cover the surface of your bait vegetable the next morning. With many snails in one place, all you have to do is pick out the bait and your snails will have no choice but to enjoy their ride out of your tank. After this point, it’s up to you how you dispose of them, although I would suggest putting them in a pond where they can be eaten by large goldfish and carp rather than thinking up ways to kill them off.

If you want to take it one step further and trap the snails then there are snail traps available which essentially allow the snails to enter but, once they are inside, are unable to leave. You can make your own DIY snail trap using a clear container with holes big enough for a snail drilled into it and a fresh slice of cucumber to lure them in. Such traps can actually catch hundreds of snails per night.

Of course, baiting or trapping snails is very unlikely to remove them all and it certainly won’t remove their eggs, but this method does however remove a good number of pest snails in one go. Naturally, you will have to repeat this in a few weeks to remove snails that hatch and grow to be adults in the meantime but at least you can prevent extreme numbers of snails by doing so.

Biological control of aquarium snails involves introducing snail-hungry predators into your aquarium to prey upon the snail population. Of course, you should only attempt this if the predators you choose are compatible with the other fish and invertebrates in your aquarium, but providing they are compatible, this method is not only the most effective but also requires considerably less effort.

Not all snail-eating species are easy to keep and many have specific requirements or grow quite large, so make sure you research beyond their snail-ravenous qualities. Effective fish species for controlling or even eliminating snail populations include many loaches such as the clown loach or puffer fish, both of which have very specific requirements.

The assassin snail is a solution for almost every tank. Small, generally harmless to other aquatic life but a deadly threat to pest aquarium snails, assassin snails are very capable of keeping pest snail numbers down. They don’t look overly ugly for a snail either with dark brown and yellow stripes covering their small yet attractively shaped shell.

The number of assassin snails needed depends upon your tank size and number of pest snails but generally, 3-4 snails per 10 gallons will be more than ample. Assassin snails can be quite expensive although they are very effective in the long run so many people are happy to pay the price. In the long term, they are a cheaper option than using chemicals. They are slow to reproduce and require a male and female snail meaning they won’t inundate your tank like the considerably uglier pond snail is capable of. 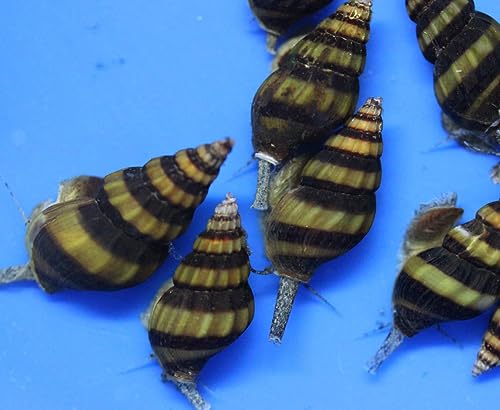 When introducing assassin snails to your tank as a method of pest aquarium snail control, do be sure to avoid overfeeding and keep your tank clean as assassin snails won’t go to the effort of hunting down living prey if there are plenty of easy pickings to scavenge. Having said that, assassin snails will revert back to eating leftovers and vegetable detritus if there are no more snails for them to gorge themselves on.