When you buy freshwater fish there are specific steps you must take to ensure you are buying healthy, and vibrant specimens. It doesn’t matter the age of the aquarium, the state of the specimens when you buy is very important. The fish should be kept as stress-free as possible from the pet store’s tank to when new fish reach their new home. 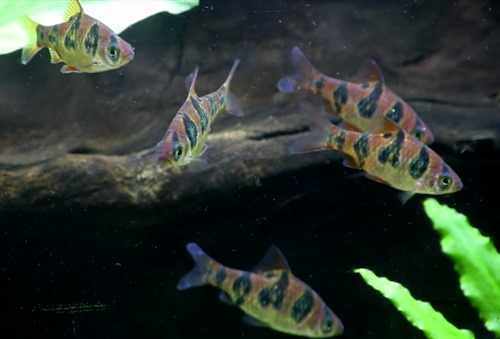 When you buy freshwater fish, you want the best fish in the tank. This helps you and the pet store. You get the best possible individual and the remaining fish have a chance to re-establish dominance and get more food and territory.

If you can’t catch the fish by yourself (healthy fish are commonly harder to catch than weaker ones), you should seek help from the person who you buy your fish from. Be sure he/she is gentle enough to pick the best fish in the aquarium.

If at all possible, select the dominant fish of the species. Picking one that looks lonely or shy is a sure way to buy freshwater fish that will become a future problem.

The tropical fish should be in full color and show alertness and open and undamaged finnage. The fins should be complete, open, and held at attention. When you purchase fish, they should look alert and well aware of their surroundings.

Don’t ever purchase fish from a tank with dead or diseased fish in it. When you buy freshwater fish, you don’t need to transport diseases that can create havoc in your new system where they will be naturally stressed anyway.

Watch for fish lying on the bottom, with clamped fins or odd spots, lesions, or wounds. Many medications discolor the water, stay away from medicated aquariums.

Netting and moving fish easily in the right way 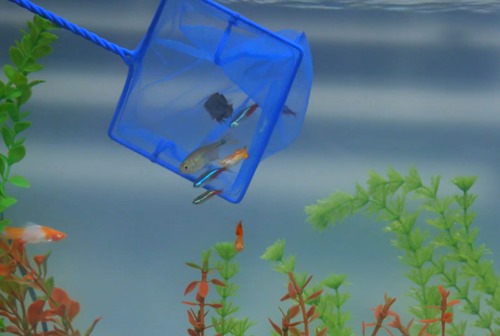 Most fish have a natural slime coating that covers their entire body. The slime protects the skin and scales from invasion by parasites and pathogens. Quite often the slime is stripped off from the fish during netting. It is better that the fish are always gently handled and with as little physical contact as possible.

Two nets often help, one to drive the fish into the other. Frantic lunges not only terrify the fish but stir up sediment and maybe uproot plants. A neat trick practiced by some aquarists is to give some favorite food regularly in the net, so that the fish associate the two, and so are willing to go into the net as soon as it appears. 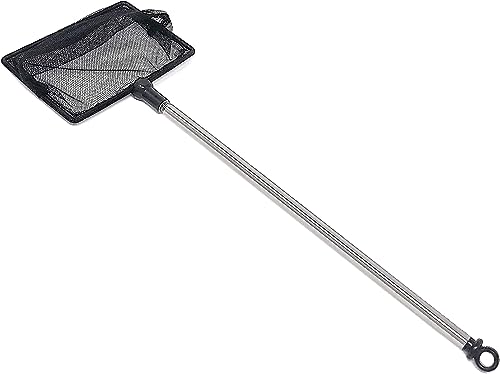 Should a fish jump out of the net onto the floor (and this happens to most of us), never pick it up with a dry hand. Place the wet net over it, and pick it up lightly with the fingers outside the mesh. It is as well to hold the fish in this way as soon as it is caught, to reduce the chance of its jumping.

If you buy freshwater fish from a series of different tanks, be sure that each tank’s specimens are bagged separately and the individuals kept in their tank water.

In addition, a different net should be used for each tank when you buy freshwater fish. Preferably one that has been dipped in a solution to prevent the transmission of diseases from tank to tank.

In some cases, the store will have an individual net devoted to each tank. That way the net is only placed in one tank. Even in this case, a disinfectant solution should be used for all nets on a very regular basis to kill any pathogens trying to establish themselves.

When you buy freshwater fish, the bagging procedure is very important, since the water is cut off from the air by the bag. Professional stores will either turn the bag into a balloon and trap as much air as possible in the bag so that it is quite hard, or they will use an oxygen tank to deliver a shot to the bag.

This is not very common anymore for most who buy freshwater fish but can be seen when a store is required to ship tropical fish long distances.

When you buy freshwater fish, a more common additive to the bag to protect the fish from their own waste is a squirt of a water conditioner, which also provides an artificial replacement for the slime coating the fish naturally produce.

A number of quality water conditioners #ad have a liquid bandage in them that covers any damage when you buy freshwater fish. The artificial slime coating protects them when they are most vulnerable. In some, there is even a stress reliever to soothe the fish during this stressful period of their life.

For many reasons, the bagging of fish should be done just prior to returning home if at all possible. Make the pet store your last stop before going to the location of the aquarium.

You want to ensure that the fish remain with as little stress as possible when in the bag. That means making them stay in these confined conditions as short as possible. Ensuring as much oxygen as possible is available during that time should be a high priority.

Fish also do not like sudden movements or being enclosed in the bag much. The best thing here is to place the bag where there is as little movement and vibration as possible.

Choose an opaque outer bag. Try to minimize the amount of light the fish are exposed to, this reduces their ability to see much and generally soothes them during the trip.

The trapped air style of bagging fish offers about four hours of oxygen to a single or pair of fish in a standard fish. This is quite adequate for most trips from the local pet store directly home.

If the ride is especially long, the rubber band may need to be removed. Flush the bag of older air and then close and seal with new air with the rubber band. This can extend the length of oxygen for the fish for a while, but remember that other factors such as temperature still are in play.

If you know you are traveling quite a while, ask to have each fish bagged individually. If possible, use a larger bag to trap more air in it for the trip.

Temperature can fluctuate quite a bit over time. The problem is during either extremely hot or cold periods. Rapid temperature changes can stress the fish when they are as little as 2 degrees Fahrenheit in a 24 hour period.

Often the result of serious fluctuations is the sudden onslaught of ich – a parasite that looks like little white spots of salt on the fish and scales.

Temperature changes weaken the ability of the fish to fight off the invasion of this parasite and allows them to get a foothold under the scales.

On very cold days, I prefer to hold the fish bag(s) under my coat to protect the heat from being sucked away while traveling outside.

I will do everything I can to reduce heat loss as much as possible and to keep the temperature close to the same as the fish were acclimated in the original tank.

In summer, the problem is the opposite, in this case, the fish are kept in the shopping bag and often placed on the floor of the car for the duration of the ride to reduce the chance of sun or other hot parts touching the bags and overheating.

Needless to say, when there is such a temperature extreme, it might be wise to wait a few days until the weather moderates as much as possible. It makes no sense to buy fish on the coldest or the hottest day in the year.

Introducing new fish to an aquarium 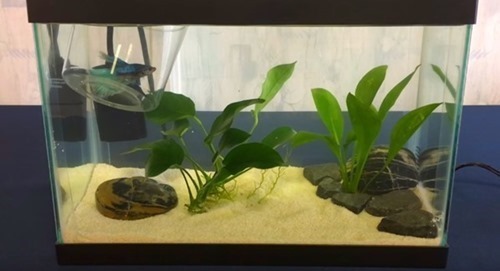 The last thing you want to do is to suddenly expose them to this temperature difference, The best way to deliver the fish to the aquarium is take a half hour or so to do it.

Adding a good water conditioner to the tank is highly recommended. This solution provides an artificial slime coat to allow the fish time to regenerate the natural one that may become damaged during the transferring process.

Acclimating the new fish with the older fish

While the above sequence is playing itself out and the new fish are acclimating to the water and temperature, you need to make the aquarium environment as welcoming and stress-free as possible.

If the tank is a new aquarium set up with no fish or other inhabitants, there is no need for this step. But, if you do have previous occupants in the aquarium, these new fish will be seen as invaders.

The old fish are already comfortable in their water so they will not have any problems with adjustment, the new fish will. They have no idea what the territorial arrangements may have been, who is the top of the heap and the places that are jealously guarded. The old occupants will continue to defend their territory and rights unless they are forced to give them up.

A useful method is to feed the fish just as the new fish are being released. This will split the older ones’ attention and give the new ones a chance to get a bit more used to the new environment.

If there is a lot of aggressive behavior, then the next step would be to go into the aquarium and move the decorations around to disturb the territories and established hiding places for the existing fish.

When this occurs, all the fish are essentially put on an even playing ground. They are all fighting for new territory and no-one already owns anything.

This also prevents new fish from inadvertently trespassing on established areas and being attacked without warning.

This trick is especially useful when dealing with a tank of African Cichlids where the fish are all quite aggressive and weaker ones can be hurt.

By disturbing the established territorial areas, the new fish have a better chance to get used to the new aquarium conditions and survive the first day.