When you first set up your aquarium it will lack any of the nitrifying bacteria that are essential to maintaining water quality and it is only through knowing how to cycle an aquarium that you can get the balance right. It will take time but is probably the most important thing that you can do towards successful aquarium keeping.

The aquarium cycle is simply the process of setting up the aquarium so that it develops the nitrifying bacteria in the substrate and the filter and there are two main ways of doing this, with fish or without fish.

I am assuming that at this stage you have already set up your tank, have it planted, and have dealt with any chlorine in the water. Chlorine and bacteria do not mix and your tank will not cycle with chlorine in it.

You need to choose two or three starter fish and add these to your newly set up tank. Start feeding them but take care not to overfeed them as this will cause problems. If in doubt about the amount of food watch them eating to make sure that they are eating all the food that you put in the tank.

After a day or two, you need to test the water for an increase in ammonia. It may be a few days until the ammonia levels have increased greatly but don’t let them get too high. Under 0.25ppm is fine but anything over that and you will need to do a partial water change to bring the ammonia levels back down.

Once your ammonia and nitrite levels are zero you have established a biological filter and are ready to start adding extra fish. But always only add a few fish at a time so as not to overwhelm the biological filter. 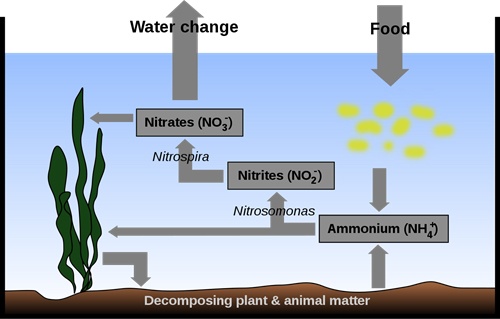 There is a growing movement amongst aquarists to cycle new aquariums using a fishless aquarium cycle.

Fish that are used for cycling an aquarium will experience peaks in ammonia and nitrites and will suffer stress as a result. If you are confident that you will be able to monitor ammonia and nitrite levels on a regular basis and react accordingly, then you reduce the levels of stress for the fish and may feel confident that the fish will not suffer.

The aquarium cycle is exactly the same as above but without the fish. Rather than relying on the fish waste to add ammonia, you will be adding it through other means.

What you can do to add some ammonia and start the process off is to add small amounts of fish food. This food will sink to the bottom of the tank and start to decay, causing ammonia to be formed. This in turn will cause the nitrifying bacteria production that is needed.

The whole process can take four to six weeks but don’t be tempted to take any shortcuts as adding fish at this stage will simply cause ammonia and nitrite spikes and the distress to the fish that you were trying to avoid.

Another method is to add a frozen prawn in a nylon net to the tank. As the prawn decays it will add ammonia and start the aquarium cycle. For someone who is trying to avoid fish suffering, it does seem bizarre to use a dead fish!!

The third method is to use a commercial ammonia source. Make sure that it is unscented and then add ammonia to the tank until you get a reading of about 4 ppm. This gives the conditions for the start of the aquarium cycle. It is then a matter of monitoring the ammonia, nitrite, and nitrate readings, topping up the ammonia occasionally.

Once the Ammonia level returns to zero within about twelve hours you know that you have enough nitrifying bacteria to support your fish population.

Remember – Any kind of medication added to the tank can destroy the biological filter. If this happens the tank needs to be cycled all over again.

Tip – When you have moved on to your second tank, you can short circuit the delay by adding some of your old substrate to your new tank. This will already contain the bacteria and will ‘seed’ the tank to speed up the process.

You have come across different methods for cycling an aquarium but by far the quickest and easiest is by using a commercial ammonia product. This might seem a bit strange because ammonia is one of the most hazardous liquids imaginable in its raw state but used properly it will get your nitrogen cycle established in record time.

So, go and buy a small bottle of ammonia and some starter bacteria from your local aquarium store or online. 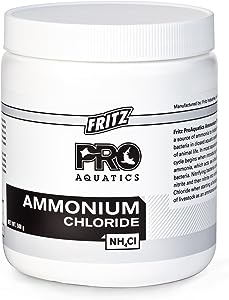 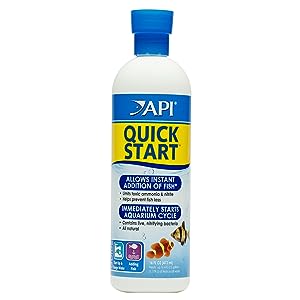 Set up your tank, plant it, and fill it with water. On day one add enough ammonia to give you an ammonia reading of 4ppm. Add a bit at a time, keeping count and allowing it to mix in thoroughly before testing. Be careful not to overdo it.

What this does is bypass one of the steps in a traditional cycling method. There is no waiting for things to decompose to add ammonia it is there from day one speeding up the process.

Now add some starter bacteria as per the manufacturer’s instructions.

Test the ammonia levels daily. It will probably take about a week for the levels to return to zero. As soon as they do add the same amount of ammonia and another dose of starter bacteria.

The return to zero should be quicker this time and you should start to see a nitrite spike developing. Keep repeating the process until ammonia levels return to zero in 12 to 18 hours. Once your ammonia and nitrite levels are both back to zero your tank is fully cycled.

Reduce the resulting nitrate levels with a 30% water change and start adding fish.

One extra precaution is to let your filter run with activated carbon for a day before adding any fish just to remove any chemicals that were in the ammonia.

The tank should theoretically now be ready to accept a full load of fish, but it is still wise to introduce them a few at a time and test the water regularly.