The ‘clean up crew’ refers to a group of snails, crabs, shrimp, and starfish that are utilized in saltwater tanks to control aggressive algae growth, excess detritus, and anaerobic sand bed compaction (they sift your sand bed). In a balanced aquarium, nutrients and added chemicals are removed through regular water changes or biologically processed. When not balanced, conditions favor the growth of algae, organic debris, detritus, and other nuisance pests. The clean-up crew occupy different areas of the tank – rock, sand, and glass, and offer a natural solution to controlling these problems and pests.

When setting up a new tank, it must cycle before adding any cleanup crew; most snails are sensitive to ammonia and high nitrate levels. After the tank cycles, a fair amount of die-off has occurred so after a good water change you will want to introduce a cleaning crew to start your tank off in the right direction before the die-off has much of a chance to degrade your water quality. Start with adding half of the total cleaning crew you will need and then slowly over the course of a few months, build up your invertebrate population.

You will also need to consider any competition, aggression, and predation between your cleaning crew members, each other, and any fish you plan to have. Certain fish may devour crew members others may compete for algae and other food sources. Also if you plan on keeping a heavily stocked tank, you may need to increase your cleaning crew numbers to keep pace with the detritus and algae growth a fish population produces.

A good cleaning crew will contain several different species of snails to ensure that detritus and algae are consumed and out of your aquarium.

Astrea Snails (Astraea spp.): Will consume hair algae on live rock as well as consuming cyanobacteria and diatoms. They have a sharp cone or pyramidal shape circled by a large ridge. They are not fond of climbing, preferring the bottom and not too steep rock as they are unable to right themselves if they land on their back and will require assistance otherwise they will perish. Grow to a maximum size of 1″, are peaceful toward other tank mates, and easy to care for. Common names Astrea Conehead Snail, Astrea Star Snail, Spiny Star Astrea.

Bumble Bee Snail (Engina spp.): Clean away detritus, meaty foods, decomposing organisms off live rock, and deep sand beds. Also, consume sand-dwelling worms and aerates the substrate. They have a black shell striped in white to yellow bands. Though peaceful, if there is not sufficient food they may feed on other snails or polychaetes. Grow to a size of ½” and easy to care for.

Cerith Snails (Cerithium spp.): Will consume large amounts of detritus, uneaten food, fish waste, and algae; excellent for controlling brown filmy algae (diatom growth) on the sand bed. They are sand burrowing snails (which helps maintain adequate oxygen levels in your substrate) that also spend some time on the rock and glass. They will do better in larger, well-established reef systems with deep sand beds. Grow to a maximum size of 1 ½”, are peaceful, and easy to care for.

Fighting Conch (Strombus spp.): Consumes detritus from your aquarium substrate, good for tanks struggling with red slime algae (Cyanobacteria) on the sand bed and clean and aerate the substrate. Do require a deep sand bed. Males are territorial to other Fighting Conch males but peaceful toward other tank residents. Grow to 4″ and easy to care for.

Margarita Snail (Margarites pupillus): Consume large amounts of algae, including nuisance hair varieties. Is non-venomous and peaceful towards corals, invertebrates, and other tank inhabitants. It has a brown body and smooth, turban-shaped shell; grows up to 1″ as an adult. Also known as Stomatella Limpet, Little Margarite, and Pearl Snail, Pearly Topped Snail.

Nassarius Snail (Nassarius sp.): They are an efficient scavenger, detritus and fish waste eater. Excellent at keeping the sand from compacting and for consuming a variety of algae in the sand bed. They prefer established aquariums with live rock and a deep sand bed. They have an oval, spiral shell (think olive pit), grow to ½”, are peaceful and easy to care for.

Nerite Snail (Nerita sp.): Consume algae, cyanobacteria, and diatoms on live rock; also an effective film algae eater on aquarium glass. They have a rounded shell and rarely knock over rock or corals. Grow to 1″, peaceful, and easy to care for.

Trochus Snail (Trochus spp): Feeds on algae, film algae, cyanobacteria, and diatoms on the live rock, substrate, and aquarium glass; passive grazers of hair algae. They are hard-working and the best at flipping themself upright after falling. Trochus snails grow to about 1″, are very peaceful toward other tank mates, and easy to care for. Also know as Trochus, Turban Shell, Top Shell, Turban Snail, Tiger Trochus, Banded Trochus

Turban Snail (Tectus fenestratus): Consumes algae on live rock and glass. Has a bumpy top or turban-shaped shell. Grows to 2½”, peaceful toward other tank mates, and easy to care for. Also called Top Snail, False Trochus Snail, or Pyramid Snail.

Turbo Snail (Turbo fluctuosa): Excellent at eating hair algae on the rocks, but also eat film algae on the glass. They have a thick turban-shaped shell with an iridescent interior and are generally the largest of the snails used as clean-up crew. Because they are very slow-moving, avoid keeping them with aggressive tank mates that can quickly outrun them. They grow to a maximum size of 2″, are peaceful toward other tank mates, and easy to care for. Also know as Turban Snail, Top Shell Snail. 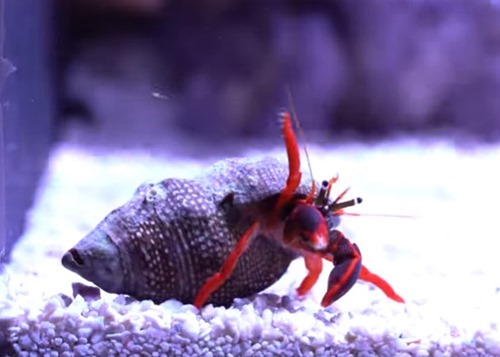 Crabs play more of a scavenger role and are best at getting to uneaten food, tend to pick at detritus and some algae.

Arrow Crab (Stenorhynchus seticornis): Used for controlling problems with Bristle Worms and Fire Worms. Considered reef safe but are semi-aggressive and like all crabs are opportunistic feeders and if insufficient food is present they may pick at mushrooms or polyps. Maybe harmed by fish. Grows to 6″. Also known as Spider Crab, Yellowline Arrow Crab.

Blue-Legged Reef Hermit Crab (Clibanarius tricolor): Eats algae including green hair algae and cyanobacteria and aeration by sifting through the sand. Generally considered peaceful and reef safe but may be somewhat aggressive toward snails which can be reduced by having empty spare shells of various sizes. Attractive for their bright blue legs. Grows to ~1″. Also know as Blue Leg Hermit, Dwarf Blue Leg Hermit, Caribbean Blue Leg Hermit.

Emerald Mithrax Crab (Mithraculus sculptus) : Eats algae, bubble algae, and various types of meaty items it can scavenge. They need a mature aquarium with plenty of rock work and hiding places. Generally peaceful but can be harmful to small fish or corals if adequate food is not available to them. Grows to ~2 ½”. Also known as the Emerald Crab, Mithrax Crab.

Red-Leg Reef Hermit Crab (Calcinuns sp.): Eats filamentous algae and cyanobacteria in addition to meaty foods. Can be aggressive toward snails when hungry or have an urge to change their shell. Keeping empty shells can help alleviate this somewhat. Grows to ~1″. Also known as Red Leg Hermit, Dwarf Red Leg Hermit.

Sally Lightfoot Crab (Percnon gibbesi): Good for algae control and detritus but if underfed or without enough algae to forage, may go after small fishes so considered semi-aggressive. Prefers a strong current and larger aquarium with plenty of rock work. Grows to 3″. Also know as Nimble Spray Crab, Short Crab, Urchin Crab

Scarlet Reef Hermit Crab (Paguristes cadenati): Excellent for detritus, filamentous, hair, and slime algae, as well as cyanobacteria. They stay small, are very hardy and generally peaceful towards tank residents. They will need new, larger shells as they grow and molt so it is important to offer them and so they avoid picking on snails for a new shell. Grows to 1½” in length. Generally larger than Mexican Red Legs and more red. Also known as the Red Legged
Hermit, Red Reef Hermit, Red Reef Crab.

Staghorn Hermit Crab (Manucomplanus varians): Will eat filamentous algae, detritus, and cyanobacteria. This is a unique hermit crab that makes a house out of the staghorned hydrocoral, Janaria mirabilis. Considered peaceful but like all crabs may be harmful to small fish or corals if adequate food is not available to them. Grows to 2″. Also know as Antler Hermit Crab, Coralhouse Hermit Crab.

Zebra Hermit Crab (Coenobiata spp.): Eats algae, including Red Slime Algae (cyanobacteria) and detritus on the sand or on the rubble. Can be aggressive toward snails when hungry or when not enough shells to change into. Grows to 1″. Also known as Hermit Zebra, Hawaiian Reef Hermit Crab, Left Handed Hermit Crab.

Most reef shrimp scavenge in the wild and tend to do the same in the aquarium. Some do extra duty by cleaning parasites and dead skin from fish residents. They also add to the color and interest of the tank.

Cleaner Shrimp (Lysmata amboinensis): Consumes detritus, scavenges leftover food and shares a symbiotic relationship with fish; it cleans the fish’s body and gets it food by eating parasites, ich, and other unnecessary products from the skin. Peaceful. Grows to 2″. Also known as Scarlet Skunk Cleaner Shrimp, Cleaner Red Skunk Shrimp.

These often serve very specific roles, have specific requirements of their own and can be more difficult to care for in a salt or reef tank environ. They also tend to be more part of the show than their less glamorous crew members. Most should never be exposed to air while handling.

Lettuce Sea Slug (Elysia crispata, Tridachea crispata): These are members of the Nudibranchs that are marine snails without a shell. They feed exclusively on upon Bryopsis algae. Are sensitive to fluctuations in environmental conditions, high levels of copper and nitrites. Non-aggressive towards the other aquarium inhabitants but susceptible to aggressive fish. Grow up to 3″. Also known as Bryopsis Eating Nudibranch, Butterflies of the sea, Lettuce Leaf Nudibranch, Green Lettuce Nudibranch.

Tigertail Sea Cucumber (Halathuria hilla): Eats detritus, sediment, diatom and microalgae from sand bed. Used for keeping the top ½” or so of sediment detritus and algae-free and so must be kept in aquariums with deep sand beds. Does require a specific acclimation process as they emit a toxin when stressed and if bothered may disgorge their internal organs which may be toxic to other tank residents. Grows to 12″. Also known as Sea Cucumber, Sand Sifting Cucumber, Lollyfish, Light Spotted Sea Cucumber.