Corals are broken down into two main groups: soft corals and hard corals (including LPS and SPS). Each of these groups of corals requires typically different lighting, current, and feeding requirements in order to live and flourish in the reef aquarium. 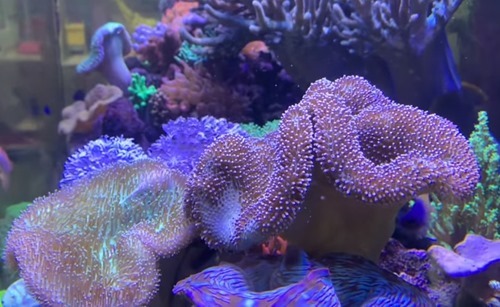 Soft corals are typically defined as not having a stony skeleton and the base is attached to live rock or has overgrown dead skeleton of a stony coral. They are highly diverse in appearance. Some resemble anemones whereas others will grow to huge structures.

Soft corals are the easiest to keep in a reef aquarium, requiring less light (PAR around 100), and are less sensitive to water quality than other corals.

The most popular species in home reef systems these days are Xenia, Zoanthids, Mushroom, Gorgonian, Colt, Star Polyps, Glove, and Carnation. Many of these contain Zooxanthellae and require moderate lighting as well as a diet of zooplankton.

Some species such as Carnation have no Zooxanthellae and must be fed. They should be placed under overhangs or caves to avoid strong lighting and tend to expand and feed at night.

Stony Corals, also known as Scleractinians or hard corals are the founders of any reef and get their name from their ability to secrete a calcium carbonate exoskeleton, which distinguishes them from soft corals. It should be noted that many other animals also produce calcium carbonate skeletons, including some soft corals. 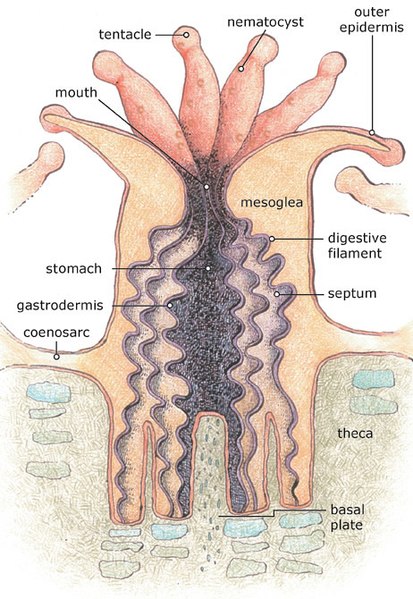 Stony corals are colonies of individual animals. Each animal, called a polyp, lives in its own calcium carbonate skeleton called a corallite. Each successive generation of polyps living on the skeleton build-up of the previous generations. This reef-building ability gives hard corals the label hermatypic.

All hard corals are to a greater or lesser extent predatory, catching food with their tentacles that are lined with stinging cells. However, the majority of hard corals have also formed a symbiotic relationship (beneficial to both parties) with zooxanthellae, single-celled algae that live within their tissues. The algae carry out photosynthesis sharing the sugars and oxygen produced with the coral polyp. The coral returns the favor by providing protection, useful waste products like carbon dioxide and nitrate plus simple minerals.

These corals with a symbiotic relationship make up the majority of hard corals and live close to the surface, where there is plenty of sunlight. Although most hard corals contain zooxanthellae from which the stony corals gain most of their nutrients, they need to feed extra sources of food in captivity to enable fast and healthy growth. 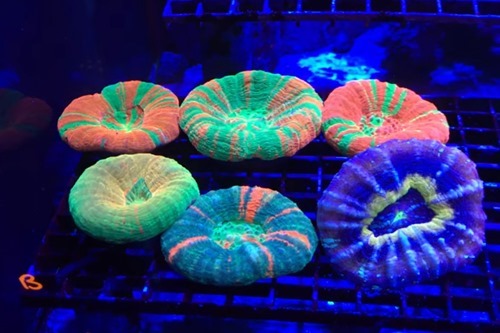 LPS corals have large calcareous skeletons with large fleshy polyps. They range in a broad range of care levels from very easy to some of the most difficult.

Go to the detailed page of LPS corals with a huge list of species: https://portlandaquarium.net/lps-coral/ 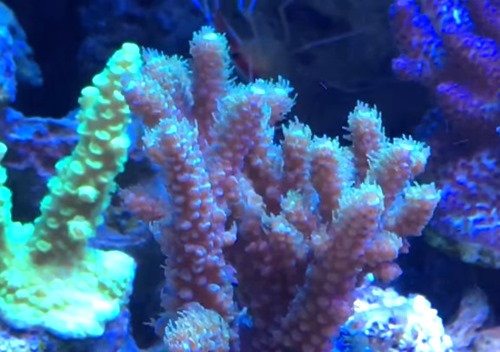 SPS corals are the most diverse and difficult to keep in a reef aquarium. They require very specific conditions to survive and flourish. They should only be kept in a well-established aquarium with excellent water quality and no filamentous algae.

High output LED reef lights are highly recommended to keep SPS corals healthy and attractive. Water flow must be fairly strong to very strong depending on the species.

For stony corals, it is very important to regularly monitor and maintain the calcium, alkalinity, and magnesium levels at proper levels for long-term health.